Before moving forward into deeper, more philosophical commentaries on the role of testosterone in shaping world history, I want to make a simple comparison. I’m not sure how many people reading this blog are Yankee fans, nor how many are familiar with the team. However, I gather most if not all know the names of the teams two main marquee players: Derek Jeter and Alex Rodriguez (A-Rod).

Now take Jeter. He is a mild-mannered sort, a quiet leader, one who always has a classy, subdued thing to say after a game that deflects any credit from himself. A-Rod, on the other hand, is often boisterous, saying things to the media that often self-aggrandize while trying really hard not to. My favorite difference between them, though, is their approach to celebration. Derek is your All-American boy, coming to the top of the dugout, grinning, patting a teammate on the back or helmet. A-Rod is more like a grizzly bear on cocaine. He erupts like a small volcano and proceeds to rush out of the dugout and jump around the man who just rounded the bases. Sometimes I wonder if his actual intent is to celebrate by eating his teammate. For anyone who can’t quite picture what this looks like, allow me to share an image or two: 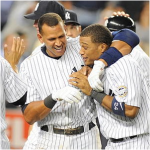 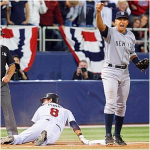 This is the sign of a man with too much testosterone, or whose body is overly responsive to his testosterone system. Helen Fisher is an anthropologist with a personality survey that measures behaviors associated with four different hormones and neurotransmitters. Fittingly, her scale on testosterone asks, “Do you demonstrate emotion in powerful, sometimes inappropriate bursts?” Dear A-Rod…

Oh, and by the way, testosterone is one of a functional class of hormones known as androgens (in fact, what I’ve been talking about the last two days is actually the entire androgenic system, which I’m summarizing as “testosterone”). Androgens are chemically classified as steroids, and artificial steroid use elevates the androgenic system. Didn’t A-Rod admit to steroid use…?

Daniel Tumminelli O’Brien, PhD, is the Project Manager of the Harvard Boston Research Initiative at the Radcliffe Institute for Advanced Study. He is also a Visiting Assistant Professor at Binghamton University where he has been a key player in the development of the Binghamton Neighborhood Project. Both projects bring together academic and city agencies in the development of innovative solutions for the everyday challenges of urban life. Amidst these efforts, his own research focuses on urban social behavior. As an educator, he has concentrated on pedagogical techniques that bring evolutionary theory to classrooms outside the biological sciences.
View all posts by Dan →
This entry was posted in Evolution and Psychology. Bookmark the permalink.