Towards a Bottom-Up Approach to Self-Deception 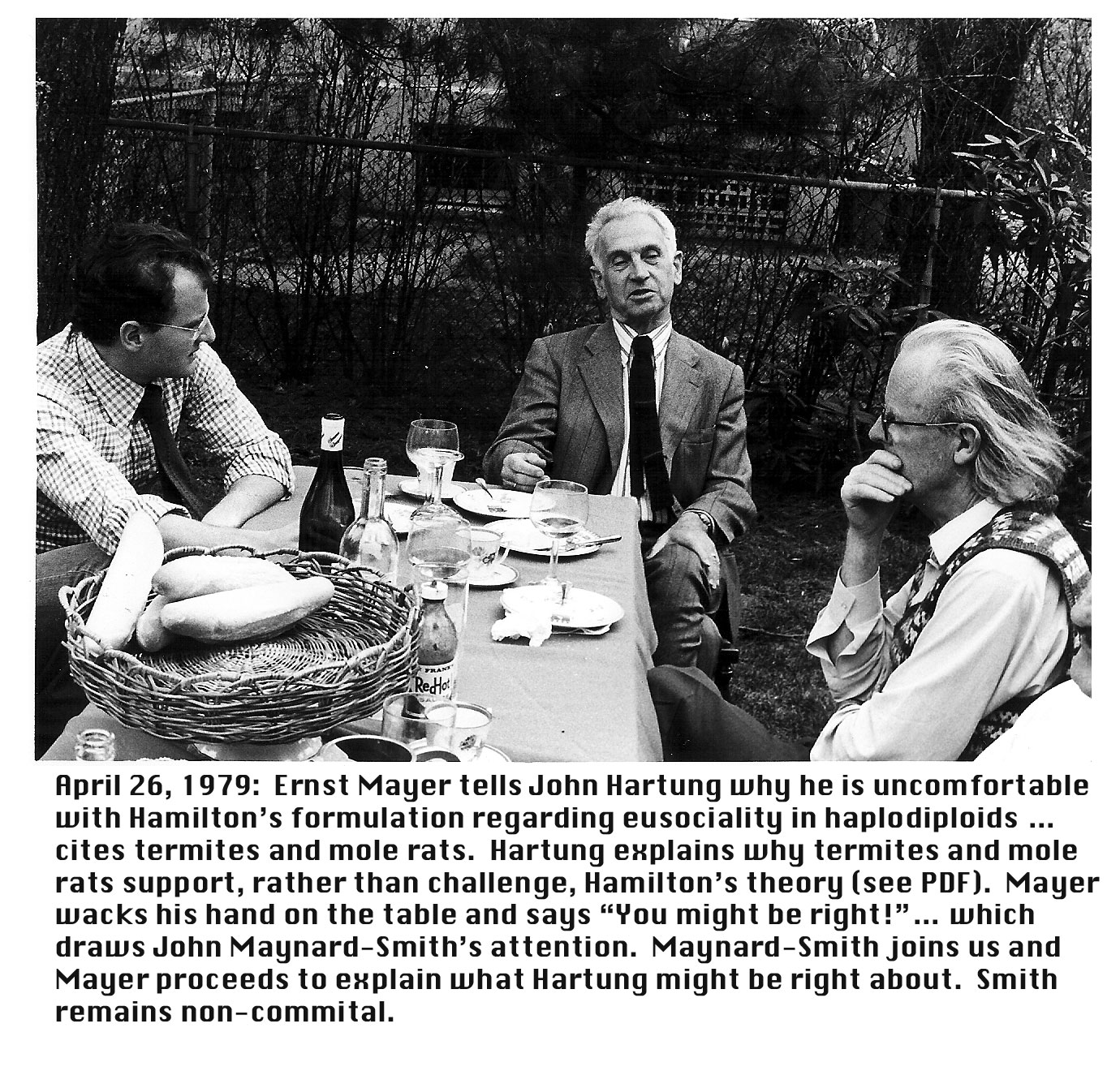 As I read John Hartung’s 1988 chapter on “self-deceiving down,” I am further convinced of the nonsense of arguing about theoretical distinctions & that we are considering the issue at too high a conceptual level to understand the influence of natural selection.  John Hartung is the Associate Editor of the Journal of Neurosurgical Anesthesiology & an Associate Professor of Anesthesiology at the State University of New York in Brooklyn, though he earned his Ph.D. in anthropology from Harvard.  Hartung’s hypothesis complements that posited by Trivers beginning in 1976.  Hartung proposes “that people use self-deception to lower their self-esteem when it is to their advantage to be satisfied with a position that they would otherwise perceive as unfair” (1988).  This corresponds to the “loser effect,” in which a subordinates adjust themselves to maintain stability in the hierarchy (see my last post regarding “winner effect”).  According to Hartung, “downward adjustment of self-esteem can facilitate psychological, social, and economic security that would otherwise be in jeopardy” (1988).

It is not quite as direct with regard to selection as is promoting oneself in courtship interaction, &, though the argument Hartung persistently makes regards subordinating oneself in an occupational setting (analogous to the hierarchy scenario), he also sets up a sex difference, wherein males will be more likely to self-deceive up (self-enhance) whereas females will be more likely to self-deceive down (self-deprecate).  The logic is the same invoked in most sex difference arguments, that males are opportunistic maters, looking to enhance their marketing & self-promotion to sow their seed as broadly as possible, whereas females are looking to invest their limited but extremely valuable stock in acquiring & maintaining a high-quality mate.  The problem with this scenario, to my mind, is that while this is reasonable given the hegemony of patriarchy since, it appears, the development of horticulture, but it is not necessarily true that hunter-gatherers for the majority of human history were gender stereotyped in this way.  My suspicion is that, analogous to the greater variety of Homo species in that hypothetically existed in antiquity than previously thought, as suggested by paleoanthropologists like John Hawks, hunter-gatherer social structures probably varied more than they do today, to which we already attribute more egalitarianism.

That being said, one of Hartung’s examples for adaptation of downward self-deception is compelling.  As he says,

situations have commonly existed, over evolutionary time, in which it is to an individual’s reproductive advantage (in gaining material, social, and sexual security) to convincingly occupy a subordinate position and/or engage a dependency which confers benefits that recoup more than the manipulated loss. (1988)

In abused spouse cases, as in hostile subordinate scenarios, the abused often comes to identify with the abuser & to make excuses for the abuser, often blaming themselves for the abuse.  He says,

if leaving is not an economically viable option and suicide is unacceptable, adaptation may require an extremely low level of self-esteem–a level low enough to suppress the expression of any attitude that might increase her risk of being beaten…this woman will deceive herself down into believing that she deserves her misfortune. (1988)

When questioned about why they returned to the potentially harmful relationship, the victims, while often citing economic dependency & religious or cultural beliefs about commitment, will actually re-frame the abuse as evidence of the abuser’s passionate love for them, or they will reinterpret events to blame themselves for provoking the injury. (2008:141)

Consistent with this, a series of studies by Alloy & Abramson & colleagues (1979, 1981, 1982, 1983, 1985) find a male bias in studies of self-deception & gambling.  Non-depressed people tend to overattribute successes to their own abilities, while distancing themselves from failures.  When asked to justify their self-attribution, males have a tendency to fallaciously point to the number of successes as evidence, reasoning which, when forced to think this rationale through, disappears.  Females do not demonstrate this tendency to reinforce their upward self-deception with this “illusion of control.”

Hartung’s conclusion is that upward self-deception is selected for mental health under normal circumstances but that downward self-deception is also a salient coping mechanism under oppressive ones.  These forms of self-deception are complementary in another way, in that this oppression may the the consequence of upward self-deception.  For instance, if the male attracts & impregnates the female through upward self-deception, it may be to the female’s advantage to believe in the male’s quality, despite new evidence to the contrary.  In a personal communication to O’Sullivan (2008:141), Geoffrey Miller suggests there may be a binary switch from total trust to total mistrust, with no fitness payoff for being in between.  I am suggesting the same but in reverse.  Consistent with this upward & downward self-deception model, males exhibit an “overestimation bias,” believing any positive affect females direct toward them whatsoever to be an indication of sexual interest (sadly, nothing could be further from the truth, apparently); women, on the other hand, exhibit a “commitment-skepticism bias” (Haselton & Buss 2000), believing all males to be insincere until they prove otherwise.  Once they prove otherwise, the payoff would be to buy into the success of the male altogether, by switching from total skepticism to total trust.  As far as I know, this remains to be tested.

What all this suggests is that, at one level, self-deception seems adaptive in a number of ways (& can also be maladaptive, as generously discussed by Trivers several times).  Yet it is too conceptually murky to be able to discern the mechanisms for selection.  Apparently, this has been a long-standing concern & several others have preferred to step back or down to a broader level, considering instead the importance of “non-conscious thought.”  A mechanism for non-conscious thought would mediate the degree to “which peole are not consciously aware of what their behavior suggests they know” (O’Sullivan [2008:137], citing Bargh et al [2001] & Nisbett & Wilson [1977]).  Further evasions around a problematic self-deception model are utilization of terms like “bias,” “disguises,” “strategies,” “inaccuracy,” & “implicity egotism” (O’Sullivan 2008:137, citing Swann & Gill [1997] & Pelham et al [2005]).  To throw an even bigger wrench in, Robert Kurzban (2007, 2010, 2011) & Kenrick & White (2011) have proposed that perhaps self-deception is a non-starter, as conscious & non-conscious knowledge may be contained in highly modular, separate cognitive systems that are not in communication with each other–hence, there is neither “self” nor “deception” in the equation.

As I am not a fan of the “massive modularity” models, believing instead in integrated networks that faciliate a fair amount of spillage into other systems (hence, phenomena like synaesthesia, with sensory modalities tripping over each other, or our tendency to have memories triggered by songs, smells, etc., probably due to neural proximity effects), for the present I will stick with the “central self” model of conscious motivation with underlying subconscious doing a lot of the otherwise metabolically expensive gruntwork, ala von Hippel & Trivers (2011) & Mele (1997).  Similarly, educational psychologists Hui Jing Lu & Lei Chang have gotten traction with this model in China, with a study that also turns a few of my presuppositions on its head.

They predict & find that self-consciousness & self-deception are positively correlated.  This makes intuitive sense after reading this piece, but, I have to admit, I have used the same scales they did & hypothesized the exact opposite (haven’t analyzed yet, so looking forward to seeing if we confirm their results).  Essentially, what they suggest is that, if upward self-deception is adaptive in promoting selfish interests but social living has also selected for prosocial moral self-concepts, it will be useful for individuals with high moral self-concepts to be more self-deceptive than individuals with low moral self-concepts.  Using Del Paulhus’s Balanced Inventory of Desirable Responsivity, which includes self-enhancement & impression management subscales, & the private self-consciousness subscale of Fenigstein et al’s (1975) Self-Consciousness Scale, the authors confirm their hypothesis.  They find self-consciousness predicts self-enhancement to a greater degree than impression management (which is promoting oneself as you believe others want you to be).

The upshoot of this is that self-deception all circles around to maintain prosocial behavior within hierarchical groups while enhancing individual fitness & is flexible enough to be useful regardless of circumstances, meaning, to properly assess selection for self-deception, we need to consider a sum total of adaptation, not merely upward or downward or morally inclined self-deception…not to mention self-deception when it simply leads us to do dumb shit & win ourselves Darwin Awards…

Christopher Dana Lynn is an associate professor of anthropology at the University of Alabama, where he founded the Evolutionary Studies program.  Chris teaches undergraduate and graduate courses in biological anthropology, human sexuality, evolution, biocultural medical anthropology, and neuroanthropology.  He received his Ph.D. in Biological Anthropology in 2009 from the University at Albany, SUNY, where his doctoral focus was on the influence of speaking in tongues on stress response among Pentecostals.  Chris runs a human behavioral ecology research group where the objectives include studying fun gimmicky things like trance, religious behavior, tattooing, and sex as a way of introducing students to the rigors of evolutionary science.  In all his “free” time, he breaks up fights among his triplet sons, enjoys marriage to the other Loretta Lynn, strokes his mustache, and has learned to be passionate about Alabama football (Roll Tide!).  Follow Chris on Twitter: @Chris_Ly
View all posts by Christopher Lynn →
This entry was posted in Adaptation, Evolution and Psychology, Exaptation, Hypotheses and tagged self-deception, self-diminution, self-enhancement, twisted self-deception. Bookmark the permalink.