What about a Lentil is Less Creative?

Posted on November 20, 2013 by Christopher Lynn

Catching up again on articles sent to me over the past few years, a 2010 Science summary by Ann Gibbons of a Current Biology piece by Philipp Gunz & colleagues (“Brain development after birth differs between Neanderthals and modern humans”) indicates that the globular shape of human brains may diverge from the lenticular shape of Neanderthal brains because of expansion in the parietal, temporal, & cerebellar regions among Homo sapiens during infancy.

Like chimpanzees, Neanderthals apparently skip a phase during which infant Homo sapiens expand certain regions of the brain, when the dome of the H. sapiens skull rounds into its distinctive globular shape…

In living people, those areas of the brain are linked with key functions such as the ability to integrate sensory information and to form abstract representations of the environment. 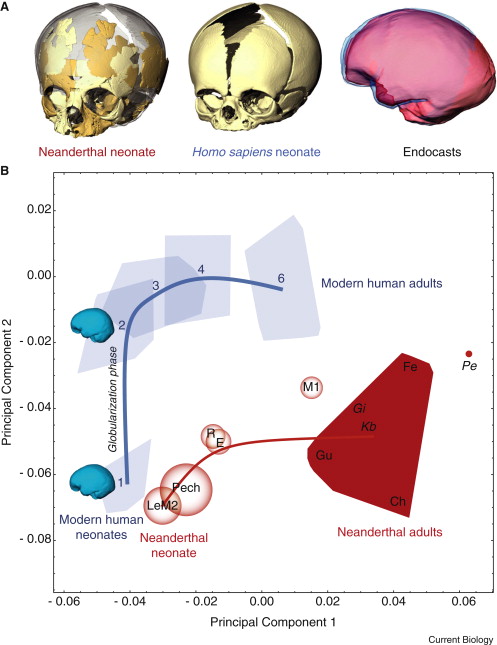 Steven Mithen’s model of the mind as a cathedral

This supports a model proposed by cognitive archaeologist Steven Mithen in his 1996 book The Prehistory of the Mind.  Mithen suggests that humans may have outcompeted Neanderthals because our ancestors were capable of more creativity. This may have been possible because H. sapiens brains were more modullarly integrated. Following Howard Gardner’s model of multiple intelligences, Mithen hypothesizes that the increasing encephalization of Homo brains was the result of the exaptation of intelligences for novel purposes & development of new areas with unique specializations (such as the prefrontal cortex). Mithen proposes that the integration of those modules varied (& varies). These general purpose modules, for such things as technical intelligence, linguistic intelligence, social intelligence, & natural history intelligence, became more integrated in H. sapiens than H. neandertalensis. The proximity of neural tissues from one intelligence area traveling through that of another facilitated dendritic connections that were otherwise too distant to be likely, facilitating creativity by enabling our ancestors to borrow a way of doing things from one area of intelligence & using it in another realm.

Mithen suggests that spacial orientations of living floors may reflect cognitive orientations & points to the differences between Neanderthal & H. sapiens living floors as indicative of his thesis. Neanderthal modes of living, like their brains, are spacially separated, whereas those of H. sapiens are concentrically oriented around campfires & hearths. This physical proximity of different activities may be reflective of neural correlates & also reinforce them, providing people the opportunity to see other activities being conducted & get new ideas. While this model remains largely speculative, the Current Biology study lends it support in areas of the brain that would have been critical to the development of creativity & modular integration.

Christopher Dana Lynn is an associate professor of anthropology at the University of Alabama, where he founded the Evolutionary Studies program.  Chris teaches undergraduate and graduate courses in biological anthropology, human sexuality, evolution, biocultural medical anthropology, and neuroanthropology.  He received his Ph.D. in Biological Anthropology in 2009 from the University at Albany, SUNY, where his doctoral focus was on the influence of speaking in tongues on stress response among Pentecostals.  Chris runs a human behavioral ecology research group where the objectives include studying fun gimmicky things like trance, religious behavior, tattooing, and sex as a way of introducing students to the rigors of evolutionary science.  In all his “free” time, he breaks up fights among his triplet sons, enjoys marriage to the other Loretta Lynn, strokes his mustache, and has learned to be passionate about Alabama football (Roll Tide!).  Follow Chris on Twitter: @Chris_Ly
View all posts by Christopher Lynn →
This entry was posted in Anthropology, Biological Anthropology and tagged brain expansion, cerebellum, Jean-Jacques Hublin, Neandertals, Neanderthals, parietal, Steven Mithen, temporal. Bookmark the permalink.