Posted on November 26, 2013 by Christopher Lynn

After that little bombshell, I just sort of zoned out & walked thru the rest of the day in a dissociative fugue, wondering about how different it would have been had I known that 15 years ago. I would love to be doing evolutionary applications to economics…Kidding (sort of, not really…maybe just the dissociative fugue part). 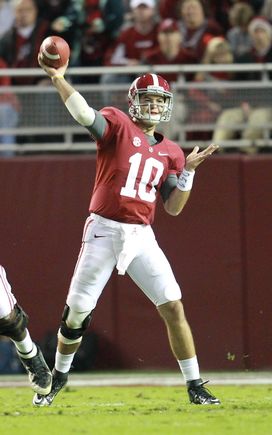 As we sat there talking to my “Biology, Culture, & Evolution” class, we riffed on football & the big game with LSU that was coming up that weekend (we kicked their asses, importantly). Football is always on our minds down here this time of year (& most of the rest), & I generally find it a convenient trope for discussing many things from an evolutionary perspective (for instance, how well could A.J. McCarron throw the ball w/o brachiator shoulder preadaptations?).

The “we” in question included Gad Saad, Professor of Marketing at Concordia University (Montreal, Canada) & holder of the Concordia University Research Chair in Evolutionary Behavioral Sciences & Darwinian Consumption. In his latest book, The Consuming Instinct, which he would be discussing at that night’s ALLELE lecture, Saad writes of the serious implications of our evolved tendency toward group affiliation & benefits of reciprocal altruism in discussing his Jewish family’s flight from Lebanon in 1975 when civil war erupted.

Though my parents’ established social networks, we were able to hire Palestinian militia to drive us to the Beirut International Airport to catch a flight out of Lebanon (after having witnessed several months of the most extraordinary violence that could ever be documented). Obtaining the protection from the PLO militia was crucial, as they controlled the passage to the airport. Hence, there was no other way to escape the carnage without the help of Muslim militia. I do not wish to make it sound as though they protected us out of the kindness of their hearts; if memory serves, there was a substantial payment for rendering such a protective service. However, my point in recounting this very painful & traumatic period of my life is to highlight the power of social networks & long-lasting friendships in that part of the world. To the people who helped us, we were friends. This trumped the fact that we were Jews. Less personally serious but more insidious (perhaps) is the way media co-opts our evolved tendency to display these allegiances. This is apparent in numerous ways but none more so in my local culture than with regard to the Alabama Crimson Tide. As Saad says,

I have long been a supporter of the French national soccer team, so I was delighted when they reached the World Cup Final in 2006. I remember vividly the morning of the big match. My companion & I took our dog for a walk, & she noticed that I was visibly tense. “What’s wrong?” she asked, to which I replied that I was nervous about the upcoming final. One might think that this is irrational. After all, I do not know any of the players personally.  I am not a French citizen. I did not have a monetary bet riding on the game. Yet I was experiencing the physical symptoms of stress that should be reserved for the players who were about to partake in this historic event. The power of affiliation that I felt for the French players had resulted in a vicarious emotional & physiological reaction in me. This innate capacity to band with an in-group & dis-associate from out-group members is at the root of sports viewing.

Indeed, before moving to Alabama, I could have cared less about football, or any sport for that matter. My friends from elsewhere still chuckle at the rabid fanaticism I now display, as exemplified by my Facebook & Twitter updates during & around games (which now extends not just to the Alabama football team but also my hometown Indianapolis Colts & Pacers as well). My wife jokes that it’s ironic I watch football to relax because I display so little joy during close games. Last year, when the Tide nearly lost to LSU, I was so tense throughout the game that the muscles in my neck cramped up painfully. When we won on a screen pass to T.J. Yeldon during the final two-minute offensive drive, I was so elated & worked up that I went for a midnight jog in my neighborhood. Although this had been an away game, there were drunk fans celebrating everywhere yelling “Roll Tide!” One pair yelled to me as they were dangling precariously from the second-story eaves of a house. A group around the corner hollered “ROLL TIDE!” from their porch. When I panted “Roll (puff) Tide” back, they responded accusingly, “THAT didn’t sound passionate! You sure you ain’t an LSU fan?!”

When Bama played Texas A&M the following week & got down by 3 touchdowns in the first quarter, I was so agitated I had to turn the TV off & clean the house. I can hear the stadium from our house & would only turn it back on if I heard loud cheering (101,000+ people cheer pretty loudly). That is one of the few games I’ve missed, &, even though I know the outcome, hearing about the final drive when we were 1st & goal & opted to throw the ball 3 times, finally resulting in an interception & loss, instead of running the ball (we have an AWESOME running game) still causes me somatic discomfort. This even though by some freak happenstance all the other undefeated teams went out & lost the following week & we still ended up in the championship game & won easily & decisively.

The coalitional behaviors of the players themselves are a critical aspect too. Last week, after the Miami Dolphins bullying story broke, the sports radio show “The Opening Drive” on Jox 94.5 had UAB Clinical Psychologist Josh Klapow on to talk about it. I was elated to hear him discuss how displays of group commitment were important in our evolutionary history for our very survival–you wanted to ensure that the group accept & protect you, he said (paraphrasing). It’s not so simple to say that the guy was bullied & it’s wrong–the more dangerous important the group behavior is, the harsher/more dangerous the rituals to ensure commitment are likely to be, he said (again, paraphrasing). This is essentially the argument of costly honest signaling theory as applied by Rich Sosis & colleagues in “Scars for War.”

We were talking about how, because fandom is a by-product of our coalitional commitment, our testosterone goes up just like the winners of the actual competition. “I wonder if this leads us as fans to engage in risk-taking behavior more after football games when we win?” I said.

“There’s a study you can do,” said Saad. “You could stand outside your stadium after your team wins,” he said, or something to this effect, “& administer a Fidelity risk tolerance questionnaire.” Lunch with the EvoS Club

“The fans leaving the games are certainly assholes,” I said, remembering harassment I endured at the hands of Bama fans when I went for a late night jog after a recent home game against Arkansas. “Remind me not to go jogging after a game to burn off steam again. Apparently, they can’t control themselves when they are overcome by testosterone.”

I was thinking he was suggesting we assess people’s willingness to cheat on their spouses after a big win & was wondering how in the hell we’d get something like that thru IRB, though it seemed like an interesting study idea. I now realize he was talking about a risk tolerance questionnaire, such as the one designed by Fidelity, to determine the financial personality profiles of investors. This is an even better idea, as it’s more practical & something I’d never think of in a million years.

My student Johnna Dominguez did a study similar to this a few years ago. She assessed well-being in football fans over the course of a semester. Fortunately & unfortunately, it was the only semester since I’ve been here that Alabama hasn’t won the BCS national champions. Fortunately, because losing introduced environmental variation into her study, so she could really get a sense of how the climate around the games influenced student fan well-being. Unfortunately, because we lost 3 games, & her compliance rate plummetted so badly she couldn’t fully analyze her final data. We believe they were related phenomena. Saad’s thesis, laid out in The Consuming Instinct, that our interest in sports, as I say, is a byproduct of our evolved coalitional tendencies, is not novel or controversial. As far as I know, this is pretty standard Durkheimian structural-functionalist theory in the anthropology of sports. Our tendency to see opposing teams & their fans as The Other & to take a war-like stance toward them maps perfectly onto the strategies & head-on clash of football.

Saad denigrated American football to some extent, pointing out that, despite the rabid zeal of SEC football, fandom of European football–aka soccer–is altogether more impassioned, nationalistic, primal, & mortal a form of surrogate combat, given the tendencies for football hooliganism to turn to real life rioting & bloodshed. While that may be true of fans–& Alabama football fans are definitely more genteel, taking their bloodshed out on innocent trees rather than people–the on-pitch battle is far more concussive & traumatic than soccer. But my point is this. We have a fantastic natural experiment here & data waiting to be collected.

Christopher Dana Lynn is an associate professor of anthropology at the University of Alabama, where he founded the Evolutionary Studies program.  Chris teaches undergraduate and graduate courses in biological anthropology, human sexuality, evolution, biocultural medical anthropology, and neuroanthropology.  He received his Ph.D. in Biological Anthropology in 2009 from the University at Albany, SUNY, where his doctoral focus was on the influence of speaking in tongues on stress response among Pentecostals.  Chris runs a human behavioral ecology research group where the objectives include studying fun gimmicky things like trance, religious behavior, tattooing, and sex as a way of introducing students to the rigors of evolutionary science.  In all his “free” time, he breaks up fights among his triplet sons, enjoys marriage to the other Loretta Lynn, strokes his mustache, and has learned to be passionate about Alabama football (Roll Tide!).  Follow Chris on Twitter: @Chris_Ly
View all posts by Christopher Lynn →
This entry was posted in Evolution and Psychology, Evolution in Media, Evolutionary Consumption and tagged A.J. McCarron, ALLELE, Consuming Instinct, Crimson Tide, football, Gad Saad, T.J. Yeldon. Bookmark the permalink.