New Paltz – A Beacon of Intellectual Freedom and of Evolutionary Studies 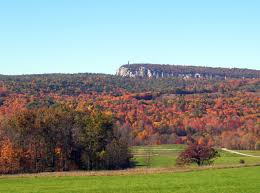 In 2007, SUNY New Paltz started the world’s second academic program in the field of evolutionary studies – this program began with a group of faculty from such diverse areas as anthropology, biology, geology, psychology, and theatre arts. Inspired by Darwin’s vision of seeing the entirety of life connected within a single powerful and humbling perspective, EvoS New Paltz embarked on a journey to bring the ideas of evolution to students across any and all academic disciplines.

As part of this intellectual journey, we started (in Spring of 2008) the annual EvoS Seminar series (supported largely by CAS – Campus Auxiliary Services) – a speaker series featuring intellectuals who address various areas of inquiry in a way that relates to Darwin’s big idea. Since its inception, this series has included more than 50 major-league intellectuals – from various academic disciplines. These speakers have included Natalie Jermijenko (notable artist and environmentalist at NYU), David Sloan Wilson (biologist from Binghamton and originator of the EvoS idea), Robb Wolf (author of The Paleo Solution and a world-renowned voice on the topic of nutrition and exercise), Richard Wrangham (anthropologist at Harvard – and one of the most famous living primatologists), and Marlene Zuk (biologist at the University of Minnesota and one of the world’s most significant living biologists) – and many more.

I want you to know that nearly all of these talks have been videotaped and are now live-streaming (for free) thanks to the outstanding work of New Paltz’s office of Instructional Media Services (with special thanks to Keron Lewis). These talks are regularly taped via Mediasite software – and in 2011, we won an award for our Global Outreach from their parent company, Sonic Foundry.

The award we won from Sonic Foundry is significant in many ways – and it owes largely to the work of a major National Science Foundation grant that we were awarded (along with Binghamton – with essential roles played by New Paltz biology professor Jennifer Waldo and New Paltz psychology professor Rosemarie Sokol-Chang – and David Sloan Wilson, Director of EvoS at Binghamton). Working together, we worked to cultivate our speaker series – and to create a website for the EvoS Consortium – evostudies.org. Evostudies.org (currently managed by New Paltz psychology graduate student, Briana Tauber), has received well over 100,000 page views since its inception – and it includes the world’s largest database of free-and-streaming videos related to the topic of evolution. Yes, the world’s largest.

Given how intellectually rich our community is, New Paltz is, not surprisingly, at the forefront of evolution education – and, importantly, is at the VERY forefront when it comes to evolution education outreach. The support of the university – and of the broader community that we call home – has been absolutely foundational in allowing this to be the case. And in case you didn’t realize how central our little town is in shaping the nature of evolutionary studies in the field of education on a global scale, I just wanted you to know.

Thanks a ton to the broader community for your support and for allowing EvoS New Paltz to grow as it has.

This entry was posted in Evolution in Higher Education, Glenn Geher, Uncategorized. Bookmark the permalink.