AiE in Madagascar I: Fleeced at the Palace of the Mad Queen & Other (Poignantly) Colonial Experiences in Madagascar

I arrived in Madagascar last Saturday afternoon and was greeted for the first time anywhere by someone holding a sign with my name on it. I’ve arrived! Actually, I have arrived, literally. I wish I had taken a photo.

I am here on a diplomatic mission, of sorts. I received a grant from the Wenner Gren Foundation to expand our Anthropology is Elemental program. The program entails posting our lessons to a new, improved, open-access website, video blogging our lessons to share with partner schools, providing resources and training for the partner schools to share their experiences with us, and producing a book of our lessons that other educators can use. Our partners are Eagles Wings Montessori School in Anatananarivo (aka Tana), Madagascar, Big Red Earth, NGO, and (now) Centre ValBio in Ranomafana, Madagascar (more on them in a later post). I connected with Eagles Wings and its middle school director Josia Razafindramanana through Dustin Eirdosh of Big Red Earth. Dustin started an EvoS program when he was in Toliara.

We’ve spent the past several months figuring out how to produce video blogs (see below for my first effort) and moving our material to a new website, which are now becoming accessible via our website anthropologyiselemental.ua.edu (follow us on Facebook to learn about our updates). I am in Madagascar to get the face time to make things actually happen, to bring a few high-end iPads to Eagles Wings, and to establish other contacts in Madagascar.

Before leaving North Carolina, James Loudon (and the Lonely Planet book I purchased for the trip and just started reading on the plane) warned me about the extreme poverty of Madagascar. Driving from the airport in Ivato to Tana, which took about 45 minutes, the poverty didn’t appear qualitatively different than other developing and even developed countries I’ve traveled in. The living conditions remind me of places I’ve seen in Ecuador, Costa Rica, and American Samoa. But I think the degree is different. There is much more intensity of that life here, at least in Tana. I’ve been told variously there are 2-3 million people in Tana. And they are crammed into a tight space. Traffic is a nightmare, and the roads are the worst I’ve ever seen. I cannot imagine driving here. I would not want the liability. Pedestrians are given the benefit of the doubt, and so it is recommended that drivers be hired to put a buffer between you as outsider and the local law enforcement if something goes wrong. I spent the first morning doing the Lonely Planet walking tour in the rain of the area I was in, but there were few streets names on the book’s map or in real life, so I found myself going in circles and walking down and up the city’s steep streets and steps. Eventually I found my way to my objective, the royal palace of the Merina dynasty, where I was fleeced by the guides waiting outside the palace for people like me who hadn’t memorized the exchange rate yet. Nevertheless, I enjoyed what I could understand of the tour of the palace grounds. The gate to the Rova, the traditional Merina seat of royalty, features an eagle & a circumcised penis, symbols of power.

The “mad” Queen Ranavalona I built the biggest palace that still stands on the grounds. Basically, her husband finished the work of his father by, with the help of the British, uniting the Merina to establish dominion over most of Madagascar. The Merina are one of 18 “tribes” in Madagascar and are probably descended from among the first settlers here, who arrived from Indonesia (later groups came from the African coast). When her husband became king, he killed all his political rivals, as you will, including many in her family. Aside from the fact that theirs was mostly a political marriage and she was one of several wives, there was little love lost between them. He had no heirs and died young. She essentially consolidated power in her favor, took over as queen, then killed her political rivals, as you will. Then she pushed out the foreigners and killed about 20,000 Christians by having them thrown off the cliffs. Apparently, she was big on torture and forced labor in lieu of taxes. Her legacy is told but not with a tremendous amount of pride. Oh, and she kept a lot of lovers. I kept asking about this point. The guide referred to her as “polygamous” until I pressed him, at which point he admitted she was just banging whoever she wanted. I would love to see a movie about her. Or a series on the Starz network. 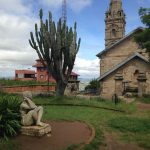 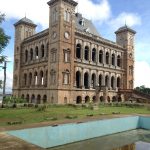 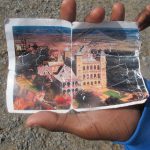 Photos of the grounds before the fire in 1995. 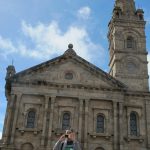 In front of the Catholic Church 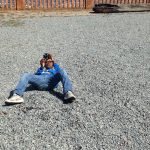 My guide and I getting meta 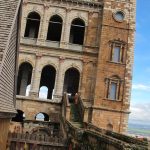 I call this “Palace Akimbo”

The tour of the museum was by another one of the guide team (that also came with “security,” all of whom requested extra payment away from the sight of the museum office). 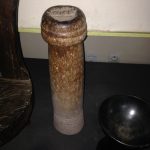 The circumcised penis symbol of power. 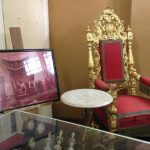 The very gaudy thrown of Queen Ranavalona I. 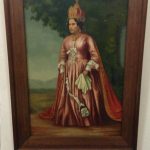 A dowdy Queen Ranavalona I in full European monarch getup. 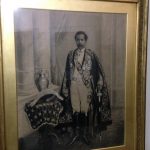 The prime minister was from not royal blood so he ruled from behind the throne by marrying three successive queens. His house, which is necessarily lower on the hill than the royal palaces and smaller, is now the museum. 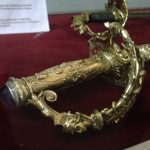 This sword has sapphires on the hilt, which come from Madagascar. 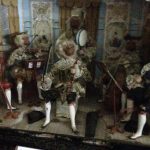 This depiction of the French monarchy as monkeys suggests what the Malagasy thought of them.

I wandered down to the heart-shaped lake at the bottom of the downtown peaks, which has a statue of out in the middle of it. There are no stoplights or signs, so I had to dash across a busy boulevard. What appears idyllic from above and even during the drive in has its own layer of grit. On the way down, two small children were grooming each other like monkeys. Later, they were aggressively panhandling. Next a disabled person was in the middle of the path with his legs displayed askew for maximum effect. Next to the lake, a homeless person was burning bottle caps at one intersection. A ways down, locals were in the lake seining for fish or something. I caught the eye of another woman panhandling, who followed me a ways. The guide book said not to walk on the part where the walkway goes out to the statue. My legs were shaking from the morning’s exertions, and I was tired of being rained on, so there was really no danger of it. What I was more worried about was finding my way back to my hotel. 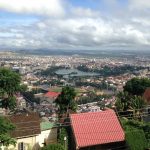 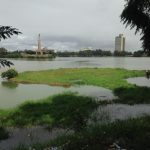 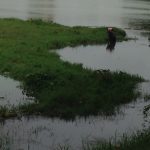 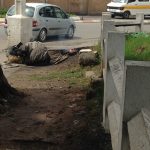 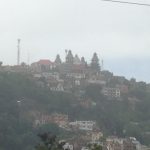 View up in the rain 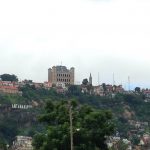 I needn’t have worried. I’m pretty sure I passed it twice in my wandering circumlocutions. I stumbled on it in a matter of minutes. I changed and went to wait for Josia, who arrived shortly with her family (husband Rija and son Hary) and carried me away. We went for lunch at the City Grill in an area that is more of a modern shopping area. I had the rivototo with pork, which a Malagasy dish with grated cassava leaves. 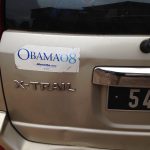 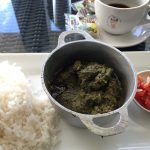 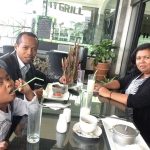 I was excited to see an Obama ’08 sticker on the back of their car, so I probed them about Malagasy interest in the U.S. political situation. “The eyes of the world are on you,” said Rija . Madagascar is greatly affected by the African Growth and Opportunity Act (AGOA), which is a Trade Act with the US. It enhances market access for qualifying Sub-Saharan African countries, and Madagascar is heavily reliant on the act for duty-free export of clothing and other items manufactured here to the US. Madagascar seems to have abandoned socialist economic policies in favor of privatization and liberalization and are heavily reliant on these exports to the US. They are afraid that if Trump cancels this duty-free access to the US, they will close dozens of factories around the country that each employ thousands of people. That will mean tens of thousands more people out of work. This will exacerbate their current economic crisis, extending from a coup in 2009 that left the country political unstable and more dangerous. Unemployment and crime have gone up, and tourism is down 50%. It’s a hot mess. Saw this in passing and loved the color.

After lunch, Josia and Rija took me to their place while we planned our next move, which involved finding me a place to stay closer to their home. They live on the east to southeast edge of town and the school is on the northeast side of town. Traffic is nightmarish in town and they needed to be able to pick me up easily. So we settled on a European-style bed and breakfast called Villa V that was just a few minutes away.

Villa V is owned by a retired German diplomat from the German Embassy. While his politics are humanitarian and progressive on paper, his colonial elitism and ethnocentrism made me cringe over the course of my stay there. I was in a beautiful villa with lush vegetation hiding itself from the outside world. He had created a pool with Jacuzzi and waterfall. Meanwhile, on the other side of his wall was a quarry, where locals mined stone blocks for construction by hand, and their families lived in huts, washing their clothes and selves in the dirty stream that ran through the quarry. For dinner, Jurgen and I sat at separate tables chatting while being served by demure brown people. Occasionally he would address them in French or German, and they would bring us a condiment or something else that had been forgotten. 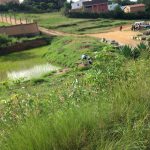 Women washing clothes in the quarry stream adjacent to the Villa. 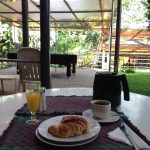 Meanwhile, I eat a croissant with coffee. I am very ashamed, but it was good. If its any consolidation, later I got dysentery eating typical Malagasy food at a hotely.

I did stay there for four nights, but after the second night, I took to avoiding conversation with him, as he would linger and launch in again to telling me about how all his workers steal from him and how Malagasies are essentially shortsighted and self-defeating.

I hope what I am doing here can actually be of help and that I am not simply reifying 150 years foreign exploitation. However, the villa was a good price (60,000 ariary per night, or around $20), and I do like wifi, coffee, and a hot shower.

Christopher Dana Lynn is an associate professor of anthropology at the University of Alabama, where he founded the Evolutionary Studies program.  Chris teaches undergraduate and graduate courses in biological anthropology, human sexuality, evolution, biocultural medical anthropology, and neuroanthropology.  He received his Ph.D. in Biological Anthropology in 2009 from the University at Albany, SUNY, where his doctoral focus was on the influence of speaking in tongues on stress response among Pentecostals.  Chris runs a human behavioral ecology research group where the objectives include studying fun gimmicky things like trance, religious behavior, tattooing, and sex as a way of introducing students to the rigors of evolutionary science.  In all his “free” time, he breaks up fights among his triplet sons, enjoys marriage to the other Loretta Lynn, strokes his mustache, and has learned to be passionate about Alabama football (Roll Tide!).  Follow Chris on Twitter: @Chris_Ly
View all posts by Christopher Lynn →
This entry was posted in Anthropology, Christopher Lynn, Education, Evolution in the Classroom, Evolution Outreach and tagged African Growth and Opportunity Act, AGOA, Antananarivo, Anthropology is Elemental, Big Red Earth, Centre ValBio, Dustin Eirdosh, Eagles Wings Montessori School, James Loudon, Josia Razafindramanana, Merina, Queen Ranavalona I, Wenner Gren Foundation. Bookmark the permalink.