We had worried when the study started that we would have difficulty juggling multiple tattoo sessions with only two researchers because we only took along one bioimpedance analyzer (BIA). The study protocol is ultimately rather simple. It involves a short questionnaire about tattoo experience and some basic demographic information, then we collect hand-grip strength using a hand dynamometer, body density using a BIA, and a saliva sample right before the tattoo starts, noting the time, and another as soon as the tattoo concludes. 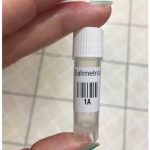 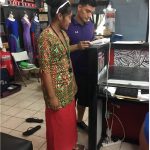 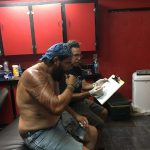 From the saliva samples, we extract immunoglobulin A and cortisol. Immunoglobulin A is an antibody that lines the respiratory and gastrointestinal tract and is a frontline defense against common infections like colds and flus. Cortisol is a stress hormone that increases when the body or mind are responding to a stressor, like getting a tattoo. Part of the classic stress response involves turning off non-essential functions to deal with the source of the stress until the body can return to homeostasis, and the production of IgA is one of the things usually suppressed during stress response. But as we point out as part of our induction protocol, the body can become habituated to certain types of stressors and have mediated responses. Take exercise, for instance, which stresses the body and results in immunosuppression when a person is new to it. With regular exercise, the body actually becomes healthier and is better able to deal with the stress of it, as well as daily potential insults of other types. Unless one overdoes it. Studies of elite athletes find they catch upper respiratory tract infections more often than most and suggest it is due to fatiguing this system. There is a growing body of research that finds overtaxed stress response systems result in deterioration in the body, including cognitive deficits results from apoptosis in the hippocampus. 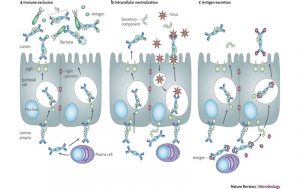 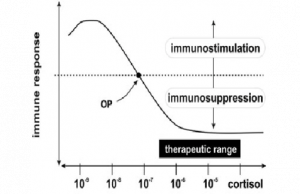 We collect body density as an indicator of fitness and handgrip strength as indicator of underlying neurocompetence. By controlling for these—essentially equalizing people for these variables—we can compare tattoo experience to the changes in cortisol and IgA from the beginning to the end of the tattoo. In our previous research, we found that people with little to no tattoo experience responded to being tattooed with the predicted spike in cortisol and immunosuppression of IgA but that people with lots of tattoo experience did not have immunosuppression. In American Samoa, the logistic catch was that we had one dynanomometer and one BIA between us. Ironically, for much of the study, because there are so few tattooists in American Samoa, there were two of us hanging out for the entirety of a tattoo session when only one of us was necessary, and not even for the whole session. We really only needed to be there for the beginning and end, except for the need and want to collect ethnographic data. As it happened, the same day Chilo said he was doing a malu was the day Joe at Off Da Rock Tattoos had a client and Su’a Wilson was doing the first hand tap tattoo we’d been invited to collect data at. Finally, we had the luxury problem of having come all the way to American Samoa to collect as much tattoo data as we could in 6 weeks and had to juggle three at once. But why did we come to American Samoa? If there are so few tattooists, why not conduct this retest back in the mainland U.S., where there are more tattoo studios in any given town than there are McDonald’s and Starbucks combined (American Samoa doesn’t even have Starbucks, though they do have Starstruck—however, they have two McDonald’s, one of which has been the highest grossing McDonald’s in the world several years running). We came to American Samoa to retest the model because you can’t generalize a scientific finding from 29 mostly women in Alabama to much of anyone else, despite the elementary nature of the finding (this finding, though compelling to media, is consistent with basic stress response and allostasis theory but cooler when applied to culture and especially to tattooing). And we came because the Samoan Islands have the longest continuous history of tattooing. Sometimes we would appeal to Samoans by saying that we are repeating the study in the Samoans because it’s where tattooing began, which is not exactly true. No one knows where tattooing began. The words tatau comes from the region, which is where we get the word “tattoo.” And Samoans never really stopped tattooing, even during the height of missionization, though it was somewhat suppressed. It depends on what source you read, but some speak of Samoans in the 18th and early 19th century as having essentially using conversion to Christianity as a ploy to get cloth, metal, and other things they recognized the value of and that they wanted. One early missionary complained that they had done less to rid the Samoans of their primitive native, ungodly ways than the Samoans had assimilated the parts of Christianity convenient to them into their tradition. Even among the Mormons, who do not generally get tattooed today, this still seems largely true. Informants we spoke to seemed almost utilitarian in describing their experiences balancing religious dictates with the things in life they want, from experiences with drugs like ice (crystal methamphetamine) addiction to wearing traditional tattoo designs on clothes and stickers as a way around getting these signs of Samoanness on their bodies to show their allegiance to fa’asamoa (tradition) and aiga (family).

The myth of the twin sisters who brought tattooing to Samoa is a story everyone knows, though there are different versions of the story. The most common version is known because of “The Samoan Tattoo Song,” which one can hear regularly on Samoan radio.

As the song indicates, women brought the tattoo tools because tattooing was originally the realm of females, but they made some mistake and ended up switching things around. The longer myth deals with the families who were given the tools, which relates to the guilds that are allowed to teach and apply hand tapping now. Ausage also believes the story originally referred to Fiti, not Fiji, which is short for the village of Fitiuta, but that it has been distorted and confused with time. When the first explorers recorded to have sited Samoa landed, they thought the Samoans wore silk knickers because of their pe’a, which are the male tattoos extending from midriff to below the knees.

This narrative derives from field notes from the Inking of Immunity and Pepe, Aiga, and Tina Health Study (PATHS) in American Samoa.

Christopher Dana Lynn is an associate professor of anthropology at the University of Alabama, where he founded the Evolutionary Studies program.  Chris teaches undergraduate and graduate courses in biological anthropology, human sexuality, evolution, biocultural medical anthropology, and neuroanthropology.  He received his Ph.D. in Biological Anthropology in 2009 from the University at Albany, SUNY, where his doctoral focus was on the influence of speaking in tongues on stress response among Pentecostals.  Chris runs a human behavioral ecology research group where the objectives include studying fun gimmicky things like trance, religious behavior, tattooing, and sex as a way of introducing students to the rigors of evolutionary science.  In all his “free” time, he breaks up fights among his triplet sons, enjoys marriage to the other Loretta Lynn, strokes his mustache, and has learned to be passionate about Alabama football (Roll Tide!).  Follow Chris on Twitter: @Chris_Ly
View all posts by Christopher Lynn →
This entry was posted in Anthropology, Biological Anthropology, Christopher Lynn and tagged American Samoa, cortisol, immunoglobulin A, Inking of Immunity, Off Da Rock Tattoos, Samoan Tattoo Song, tatau, tattooing. Bookmark the permalink.