I am excited by the prospects of returning to the field next summer to do more research, as I’ve been digging into relevant theory in cultural evolution that is, I believe, spot-on in outlining what is going on with the resurgence of Pacific tattoo cultures. I’m struck by how completely so-called traditional tattooing practices were quickly purged from many Pacific cultures in the 19th century. (I use the term “traditional” as shorthand, since Pacific cultures have maintained tattooing practices to varying degrees during this period and never been isolated from the influences of each other or outsiders—according to Samoan poet and activist Albert Wendt, as quoted by anthropologist and Te Papa Museum Senior Curator of Pacific Cultures Sean Mallon in “Against Tradition”—there is no such thing as “traditional.”)

Mind you, we all know what shits missionaries and colonial agents were in trashing native cultures, but it wasn’t one-size-fits-all trashing. For instance, the French were more interested in trade alliances than enforcing decorum, such that it appears many French colonials got tatted up in native styles to show their sincerity (e.g., Bienville). It’s like when our ALLELE guest speakers throw out a gratuitous “Roll Tide” at the beginning of their talks to ingratiate themselves with the audience, except, well, way more committed to their cause (I wonder if LSU ichthyologist Prosanta Chakrabarty will say “Roll Tide” this week when he gives his talk two days before Bama whips LSU’s patootie…).

Excited for my @UA_ALLELE talk next week.

I'm a bit nervous giving a talk in Tuscaloosa a few days before #LSUvsAlabama though … pic.twitter.com/8CgGh5kRaV

I’m a few chapters into reading Makiko Kuwuhara’s 2005 ethnography on tattooing in Tahiti (efficiently titled Tattoo: An Anthropology), and she notes that Tahitian tattooing almost completely disappeared right out of the missionary gate in the early 19th century (perhaps why we don’t see any tats in any of those Gaugin paintings). Tahitian tattooing reappeared like it did in the mainland U.S., among fringe and “deviant” types and in similar motifs. Then, what is so fascinating to me, traditional tattooing was reintroduced by Samoan tufuga ta tatau (tattoo masters). 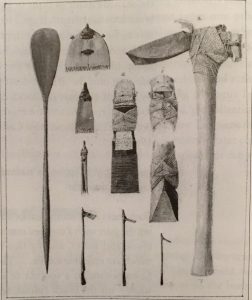 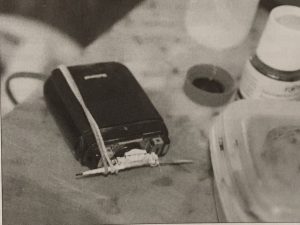 A remodeled razor used for tattooing in Tahiti (Photo by Makiko Kuwuhara, from Kuwuhara’s “Tattoo: An Anthropology,” 2005)

I am imagining the Samoan tufuga who reintroduced traditional tattooing to Tahiti was the Sa Su’a Sulu’ape guild, but I haven’t read far enough in to confirm. However, based on our ethnographic interviews with tatau historian Christian Ausage in 2017, the Sulu’ape branch of the Sa Su’a guild was all that remained and that persisted of traditional Samoan tattooing. Sulu’apes have, as far as we can tell, ensured that the Samoan tradition remained unbroken and taught all active Samoan tufuga today. At least this is one of the things we’ll be investigating. Some of these answers are no doubt in the new book by Sean Mallon and Sébastien Galliot, but I have yet to get my hands on a copy. I am imagining that a variety of environmental/social factors are at play here, which, in theory, we can mathematically demonstrate with the data in hand. Joe Henrich, Bob Boyd, Pete Richerson, Christopher von Lueden, Alex Mesoudi, Maciej Chudek, and others I’ve been reading over the past few weeks make the case and provide the models we can use to test a few predictions in this regard.

Robert Shaffer’s giant coffee table book American Sāmoa: 100 Years Under the United States Flag indicates that tattooing and other native practices were banned by missionaries in Samoa but that Samoans just tended to compartmentalize and ignore some of those dictates, while becoming über Christian. Some have derisively called Shaffer’s history a biased account of governmental propaganda, but he was good friends with several Samoans I’ve come to respect immensely, such as Reggie Meredith and Wilson Fitiao, so I don’t dismiss it out of hand. The book essentially indicates that, in the mid-19th century, American Samoa asked to become a territory of the U.S. so German mercantile companies did not take them over as was happening with Western Samoa. According to the book, Germans came into Western, set up trade, took land from native peoples, made tons of money, were pricks, and that led to the infamous standoff between British, U.S., and German navy ships that was interrupted by a hurricane (the summary of most brief histories of American Samoa). The colonial powers then simply divided the Samoas up instead of fighting over them, with Western Samoa going to Germany, Eastern going to the U.S., and the U.S. giving Britain Guam. After WWI, New Zealand was gifted Western, which became independent in the 1950s. After that, a quote from former American Samoa Historic Preservation director John Enright from his noir detective series (Fire Knife Dancing, in this case) based in American Samoa seems aptly to describe the circumstances, though it also brings into question the whole please-help-us-U.S. of Shaffer:

The relationship never had made any sense. It was just one of those uncorrected accidents of history, the result of a tactical move in 19th century gunboat diplomacy that had remained so far removed from the great power’s attention and so unimportant as to never get set back right again. For 50 years, the place had been run by the U.S. Navy as if it were a ship with an unfortunate cargo of natives. Then the distant territory’s administration had been ironically transferred to the Department of the Interior, the folks who already oversaw the rest of America’s reservations. Traditionally, the governorship had been bestowed upon Naval commanders who couldn’t be trusted with a real sinkable ship. And later, to hack redneck politicians who had been voted out of office back in Arkansas or East Texas. The result was 80 years of short-term appointed white male governors of varying degrees of racist assurance and administrative acumen. They were rarely stellar. Only in the last generation had American Samoans been enfranchised to elect their own governor and legislature, though the Secretary of the Interior still held veto power over everything. Technically, the islands were an unincorporated and unorganized territory of the greater USA.

But I digress. The simplifying model I’m imagining (great quote from someone via Katie Hinde during her recent visit by the way—“all models are simple; some are useful”) is that: Several members of a Hawaiian MC were in the house getting their Pacific tatau (Photo by author, Northwest Tatau Festival, July 2018).

Among the sources I know I’ll be returning to again and again as I explore this, Joseph Henrich “Cultural Transmission and the Diffusion of Innovations: Adoption Dynamics Indicate That Biased Cultural Transmission Is the Predominate Force in Behavioral Change.” I think everything we need to know right now is right there in that title. [Nerd drops mic]

Christopher Dana Lynn is an associate professor of anthropology at the University of Alabama, where he founded the Evolutionary Studies program.  Chris teaches undergraduate and graduate courses in biological anthropology, human sexuality, evolution, biocultural medical anthropology, and neuroanthropology.  He received his Ph.D. in Biological Anthropology in 2009 from the University at Albany, SUNY, where his doctoral focus was on the influence of speaking in tongues on stress response among Pentecostals.  Chris runs a human behavioral ecology research group where the objectives include studying fun gimmicky things like trance, religious behavior, tattooing, and sex as a way of introducing students to the rigors of evolutionary science.  In all his “free” time, he breaks up fights among his triplet sons, enjoys marriage to the other Loretta Lynn, strokes his mustache, and has learned to be passionate about Alabama football (Roll Tide!).  Follow Chris on Twitter: @Chris_Ly
View all posts by Christopher Lynn →
This entry was posted in Anthropology, Christopher Lynn, Cultural Evolution and tagged fa'asamoa, Inking of Immunity, Joseph Henrich, Su'a Petelo Sulu'ape, tatau, tattoo. Bookmark the permalink.