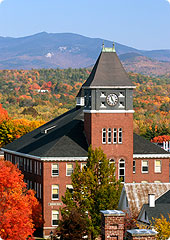 Several years ago, when David Zehr, an academic dean at Plymouth State University in upstate NH, offered to host NEEPS one year – some of us thought this was almost too good to be true. That would be the folks in the group who’d lived in NH and who know just how special this place was. So that was Kathy and me (who each spent 5 years in grad school at UNH out on the Seacoast), Sarah Strout, who’d spent some time in Manchester at SNHU, and our President, Rosemarie Sokol Chang, who was raised in the White Mountains of the Granite State – a fact that explains pretty much everything there is to understanding Rose (except her conspicuous absence of a large motorcycle that she’d likely call “her hawg.”) Otherwise, she’s New Hampshire through and through.

And from a cultural evolution perspective, New Hampshire has a lot to teach the world. Folks from NH derive from simple wood folks – who permeate the thousands of acres of forest that cover the state – nearly from top to bottom. European settlers in the 17th century had a lot of work ahead of them. They needed to build shelters, churches, schools, and stores. They needed to make determinations regarding travel – creating new forms of travel, when needed. The early settlers of New England (who came to Dover along the sea in 1623, looking for a place to settle) were plenty prepared for the enormous task ahead. And think what they had to overcome:

1. Winter extremes beyond anything they’d every seen back in England (where snow was a rarity at best).

2. Not-yet developed agriculture – with most of the claimed land owned by natives – who had little time or understanding for people from afar who were not trained in their languages and ways.

3. Kin members distributed broadly across two continents – and relations with these new people (called “Indians,” for reasons of historical accident – a common cause of the names of things) as ambivalent – on the good days.

4. The Europeans who succeeded in settling places like beautiful New Hampshire, clearly had some strong values – values and patterns that can be well understood from the perspective of Evolutionary Psychology.

– Europeans who succeeded in settling Northern New Hampshire worked in groups – they came in groups – and these groups served as a social core for their lives. Having a built-in group of helpers, including a mixture of kin and non-kin, is a great formula for getting things done cooperatively and efficiently. If you need a house built quickly and well, I’d say to hit up a group of cooperating Amish who have tool sets – rather than 5 randomly chosen college kids. No offense, College, but groups with norms that dictate cooperative and helpful behavior – and (literally) community building – outcompete a group of college students with some tasks any day.  (and this is OK if you’re in college – because college is all about learning – you’re not supposed to be experts on life at this point – not yet!)

Why did cooperation evolve to come typify our species? Probably because the benefits to the cooperating group were so huge (you all get a roof over your heads) and each individual in that group benefits accordingly.

I’d argue that David Zehr and his colleagues at Plymouth State drew upon the work ethic norms of Northern New England to help make NEEPS VI a huge success this year. The culture of a region sits defining in some ways – and New England cultural norms are strong and deep. While not a native Granite Stater, David has been there long enough to get it. If you want to host a fun and successful intellectual conference on evolution in New Hampshire, you’re going to have to get some grass stains on your knees and you may get a few callouses along the way. I know David well enough to know that he realized this was the deal. He and his team are New Englanders, and they expect nothing less than to get some grass stains on their jeans and dirt beneath their nails.

The effort put forth by the Plymouth Team was huge – and the event ran like a well-greased machine. None of the posturing and infighting that would have typified an effort in other parts of the world or the “well, any solution is fine” wishy / washy nonsesnse that may have characterized folks from yet other locales.

These were New Englanders, and getting it done right matters in this part of the world. And working together is axiomatic.

At the end of the day, this conference was seamless from top to bottom. Talks were on time, snacks where always there when needed, and all attendees felt totally comfortable about the basics of the conference (internet access? How to get to lunch? How can I hang my poster? etc.). The devil is in the details – and the details were resolved before anyone made it across the Massachusetts state line.

Having such an A-Game in terms of the running of the show, made it so that much more focus could be spent on the issues at hand. What is human nature? How can we define it? Is the human mind a massively modular entity? Can you simulate the real world – with any validity – in psychological research? Will Evolutionary Psychology ever reach its potential? Will clinical psychologists ever pay attention to the awesome work we’re doing? Will we convince every school district in the nation that some part of the social studies curriculum based on human universals may have as much in the way of positive influence as other aspects of the social studies curriculum?

The questions that emerged from NEEPS 2012 were many – and the experience included a great deal of discussing, challenging, questioning, and, most importantly, learning.

I learned a lot – and I trust that the many students in my EP Psychology Lab did too!

I say we follow David Zehr’s lead and take a little New England work ethic to our efforts to make evolutionary psychology bigger, stronger, and more applicable to issues of our everyday lives.

Thank you to David and all the other great folks at Plymouth State who helped make this a truly memorable experience. The NEEPS meme continues forward, upward, and with high fidelity and high fecundity. Next year, Pennsylvania! Let’s see if their woodsmen have the same work ethic that allowed 2012 to be such a huge success. With John Hinshaw at the helm, I have a feeling that we’re in good hands!

Glenn Geher is professor and chair of psychology at the State University of New York at New Paltz. In addition to teaching courses at both the undergraduate and graduate levels, and conducting research in various areas related to evolutionary psychology, Glenn directs the campus’ EvoS program, one of the most successful, noteworthy, and vibrant features of a campus that prides itself (rightfully) on academic vibrance. In Building Darwin’s Bridges, Glenn addresses the details of New Paltz’s EvoS program as well as issues tied to the future of evolutionary studies in the rocky and often unpredictable landscape of higher education.
View all posts by Glenn Geher →
This entry was posted in Evolution and Psychology, Evolution in Higher Education, Glenn Geher. Bookmark the permalink.